Voyage of the Stick Purse (AKA Crazy European Adventure)

I know, it's been a while since I've posted, real life and work have meant I've done very little A&S activity this past 6+ months. But I have a doozy of a post for you this time.

This fall Avelyn and I spent almost a month travelling through Europe. We stopped in Paris for almost a week, and then did a tour through Belgium, Netherlands and Germany. On the trip, I was on the lookout for representations of the stick-purse. I also planned a visit to the Fries Museum to actually see the original artefact and see if I could see for myself some of the construction questions I still had. So, without further ado, here are examples of the stick-purse that I found.

We saw lots of really cool things in France, but only one stick purse to be found. It's a post period painting from the Louvre called A man weighing gold by Gerard Dou. I've posted the pictures on my smugmug account at: https://dgotlieb.smugmug.com/Travel/Europe-2017/France/Louvre/i-7PdhPqp/A 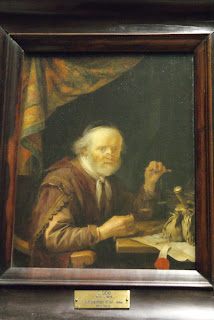 More luck in Belgium. We stopped in both Brussels and Bruge and I found an example at the Old Masters museum in Brussels. This one is  also post-period and is called The Money Counter by Willem van der Vliet. Here's the link: https://dgotlieb.smugmug.com/Travel/Europe-2017/France/Louvre/i-7PdhPqp/A 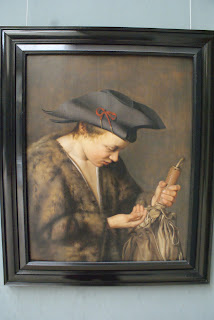 We found a few good examples here but not as many as I expected. I'll go in order. First up is the Boijmans Van Beuningen museum in Rotterdam. They had a couple of post-period etchings that I hadn't seen before.

The first one is "Christ Driving the Money Changers from the Temple" by Rembrant. 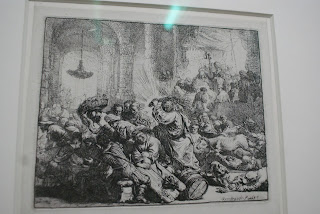 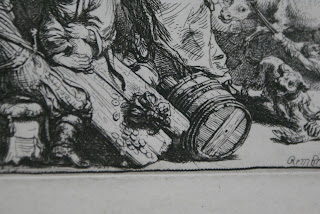 The second is an engraving done by Salomon Savery based on Rembrant's work, also post period. 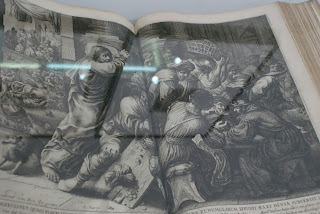 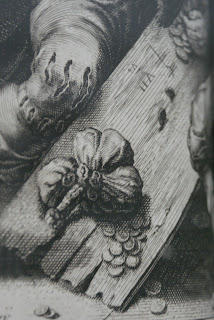 There were no stick-purses in Amsterdam that we found, but then we went to the Fries Museum to see THE stick-purse. :)

I took dozens of close ups from multiple angles. Main discoveries were that it looks like I did in fact engineer the bottom and the back seem correctly, which is what I really was hoping to be able to check (yay). However, in discussion with Avelyn and looking closely, the pouch probably had flaps originally. There are what look like leather buttons still attached to the pouches. Here are a few pictures, but all of them are posted in the Fries Museum album. 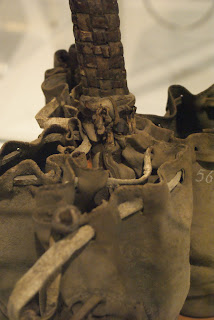 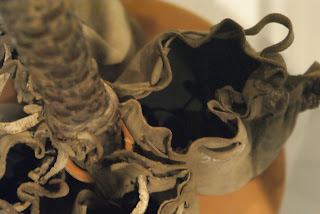 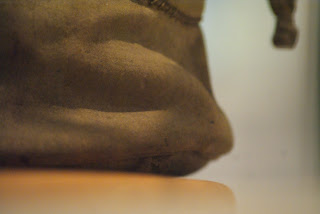 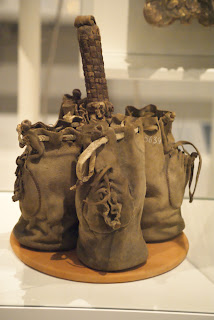 Our next stick-purse sighting was in Cologne Germany at the Wallraf Museum. Here we found two new paintings I'd never seen before (they have no mention of money changers or anything related in their titles).

The first is a painting called The Quill Pen Cutter (I know, right????) from 1627 by Jan Lievens. 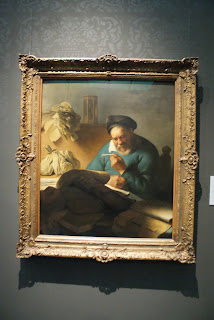 The second one is Sampson and Delilah by Jan Steen from about 1660. Again it had nothing really to do with the topic but there's a money lender in the corner of the painting. 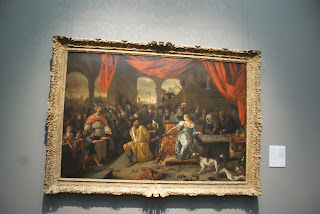 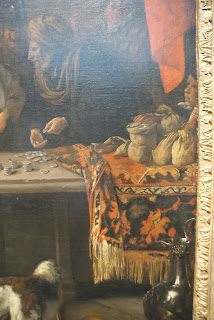 None of these paintings were part of my original research of the stick-purse, so I feel like I've added to my knowledge, even if they were all post period. Plus I was able to confirm that my informed guesses about the construction of the Fries purses were bang on, which makes me pretty happy (even if I do need to make a new one now to add the flaps.) :)
Posted by Dafydd at 18:37