Haven't posted for a while, largely because I didn't want to spill the beans on a surprise. But now that its been delivered I can unveil the rapier sheath that I did for Lady Emelote's fundraising event.

As announced previously, the winners of the draw were Their Excellencies Percival and Christiana. However, the trick was that neither of them are fencers, so a hand-tooled rapier sheath was probably not going to be particularly useful. :) As a result, they asked me to do a custom sheath for Albrecht for his elevation to the Order of the Laurel at Lady Mary this past weekend (now Master Albrecht).

In consultation with his lady the length is custom to his preferred rapier length (yes Albrecht, everyone was in on this plot). She also felt that his preference would be to go with more natural tones rather than the heraldic colours that I usually do. So I went with a bit of a different, more subtle approach. But because this is a very special occasion, I didn't want to just do a plain brown sheath, so I essentially did tooling covering the entire sheath.

Given that Albrecht was being recognized (at least in part) for the level of his research into historical fencing, I wanted to make this rapier sheath as historically accurate as possible (with a nod given to the fact that the rubber blunts on our rapiers mean we need a tube core for a sheath instead of the historically accurate flat wooden core).

The tooling pattern is based on examples found in "Knives and Scabbards". The top  portion of the sheath has side by side heraldry where I've alternated between the laurel wreath (the symbol of the Order) and Albrecht's personal heraldry. Heraldry is very common on these types of objects, this one is similar to what can be seen in item 433 (p.140) or 436 (p.142). Down the remainder of the sheath is a pattern similar to what is called a foliate in "Knives and Scabbards", again a fairly common pattern - examples can be seen in item 444 (p.145) or item 490 (p.164). I've simplified it to be a double loop repeating pattern rather than one continues pattern and turned it into more of a geometric pattern rather than leaves and branches, I've also enlarged it to better fit the larger scale of a rapier sheath since the original was just a small dagger. To fill in the extra space in the pattern since the shape is now much larger, I used two different wolf stamps, since the wolf is a key symbol for Ealdormere and stamping of leather is an entirely period process. The effect is similar to what was done in plate 25 on p.167 with a lion passant stamp.

I also used fully period tooling techniques on this one. That basically means that I didn't cut the pattern into the leather using a swivle knife (which is a modern tool). It was just etched onto the leather and then I used my shaping tools to give it depth. It's hard to see the difference unless you look really closely at two items done with the different techniques, but it does affect the depth of the tooling marks a bit.

The brown dye is a modern antiquing dye to replicate the colours that would have been produced in period (mainly because I've yet to work out a period brown dye - but I'm working on it). I used the antiquing dye because it also helps highlight the tooling marks so that they stand out better since I wouldn't be using different colour to make them stand out.

Here are the pictures from start to finish. This is easily the most complex and detailed tooling project I've done so far: 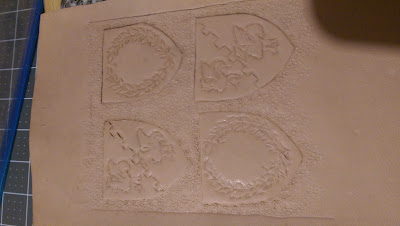 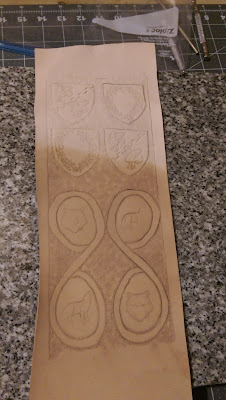 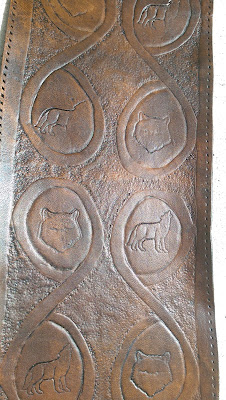 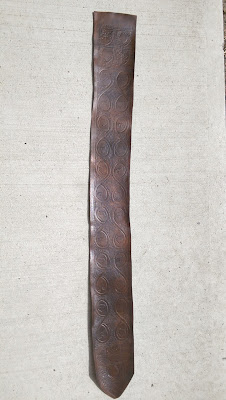 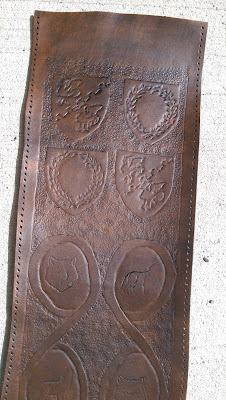 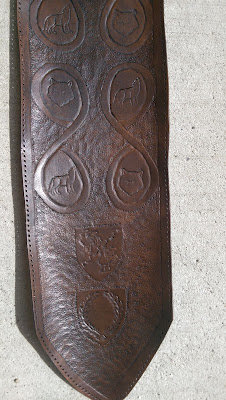 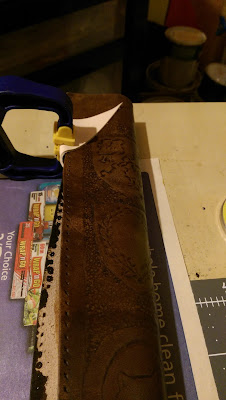 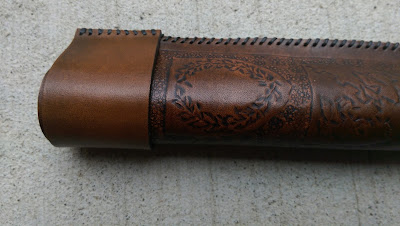 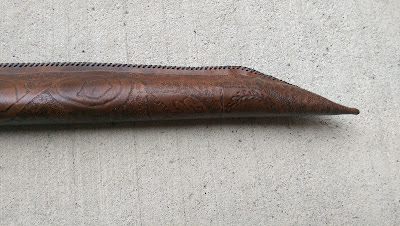 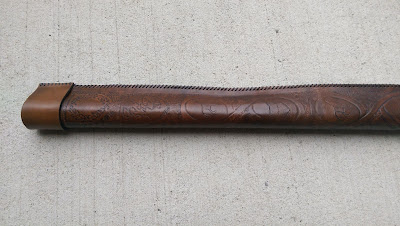 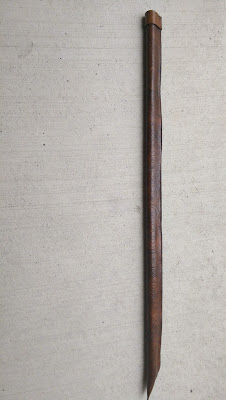