Now that I've finished my surprise for Kersteken, it's time to really crack down on the stick-purse if I want to have something done in time for QPT.

Last night I resumed stitching up the parts for the stick-purse. What I can conclude is this is going to take a while. I was joking with AElfwyn about QPT and I said that it was going to take me about 50 hours of work just to do the full mock-up that I'm planning to enter (the proper purse with the good materials will be for spring A&S). I was joking at the time but now I'm starting to wonder if I may have been more accurate than I thought.

I've got all of the body pieces cut (call that about an hour of work already). Right now I'm working on sewing the pouchlets to the main pouch bodies. I'm about half done the first one and I've easily spent over an hour doing it. It's getting a bit easier as a get better at the technique but it's an odd stitch and hard to get things lined up correctly so the stitches are relatively even.

So, at the current rate it's going to take me between 5-8 hours of work (with four bags on the purse) just to attach the pouchlets. I suspect that's actually the largest chunk of time for any individual step, as the rest of the stitches are fairly straightforward.

The good news is it isn't something I have to do in the basement like the rapier sheaths, so I can take it with me to A&S days and such to work on it. I'll be heading out to fight practice tonight to be social but I'll be trying to finish the half-done pouchlet tonight at least.

For those wanting to see what I mean by the stitching on the pouchlet, here's my original test design post with pictures. Because you're coming up blindly through two layers of leather, and because the rectangular pouchlet piece needs to be sewn in a circle, it's a bit of a challenge to get everything cleanly done.
Posted by Dafydd at 13:21 No comments:

A Gift for Kersteken (with Pictures)

I haven't posted in the last few weeks because I've been working on a secret project, and didn't want to even hint at it because I didn't want a certain someone to guess I was working on something for them.

Now that we're all clear, here's what I've been working on.

This past weekend at Feast of the Bear in Toronto, a good friend was inducted into the Order of the Pelican for her service to the realm. Not only is Kersteken super deserving of the honour, but she's also a local fencer. In fact, she's one of the first fencers to get authorized that I had helped to teach. As far as I can tell, the only time you won't find her on the rapier list at an event is when she's in the kitchen, doing entourage or otherwise working (it seems like she's always working, but also always on the rapier list - maybe she has a clone. That would explain how she gets so much done).

Anyway, I decided that I needed to do something special for the occasion. That of course meant making her a rapier sheath.

I had to do a bit of plotting though, so I tricked Kersteken into letting me know how long her rapiers are. It went something like this:

Me: Woe is me, one of my swords is going to need to be replaced soon. Maybe I should look at getting a longer rapier. Kersteken, you use a longer sword don't you?

Kersteken: Go longer for sure! I can bring my extra one next week to practice so you can try.

I wanted the sheath to have the pelican badge on it. Of course, if you followed my badge carving project a few years ago, you'll know I didn't do that one because its insanely detailed. And this one was going to be really small, only a couple of inches high, so the cuts are all really small and finicky. That meant the first step in making the sheath was to figure out the badge.

Here's a pic of my practice attempt, which I think isn't bad: 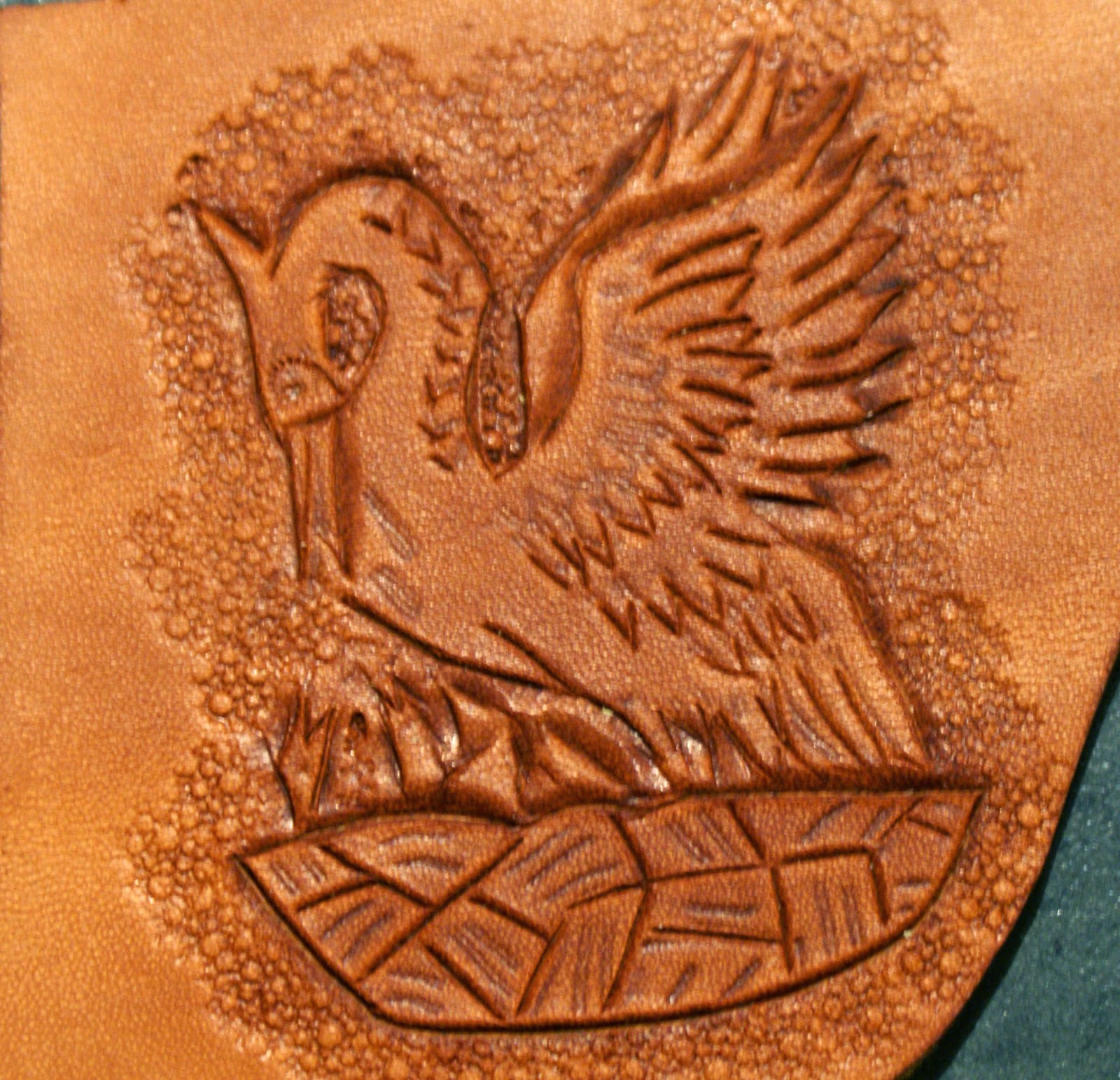 I then carved the pelican on a band of leather (I didn't want to carve it directly on the long piece for the body of the sheath since I only had the one piece long enough to make it - no second chances there). Here's the finished piece painted and ready to be attached. BTW - Good call by Avelyn to use the mustard to mark the little beaks on the chicks so it's more obvious what they are!: 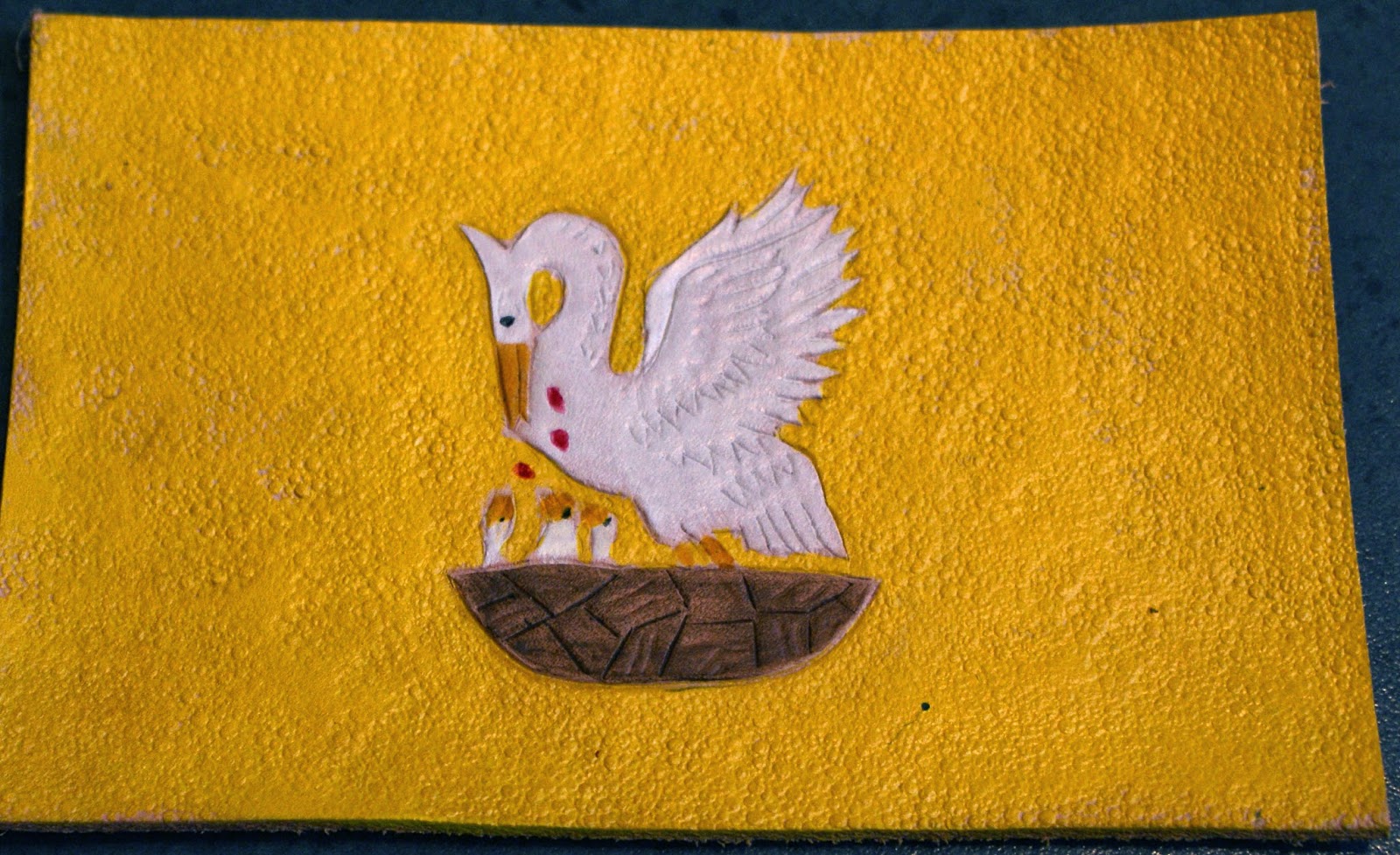 Once that was done, it was on to carving her heraldry onto the sheath, which was comparably easy. :) Biggest challenge was figuring out which parts to raise and which to push back into the background. Here's the tooling pre-painting: 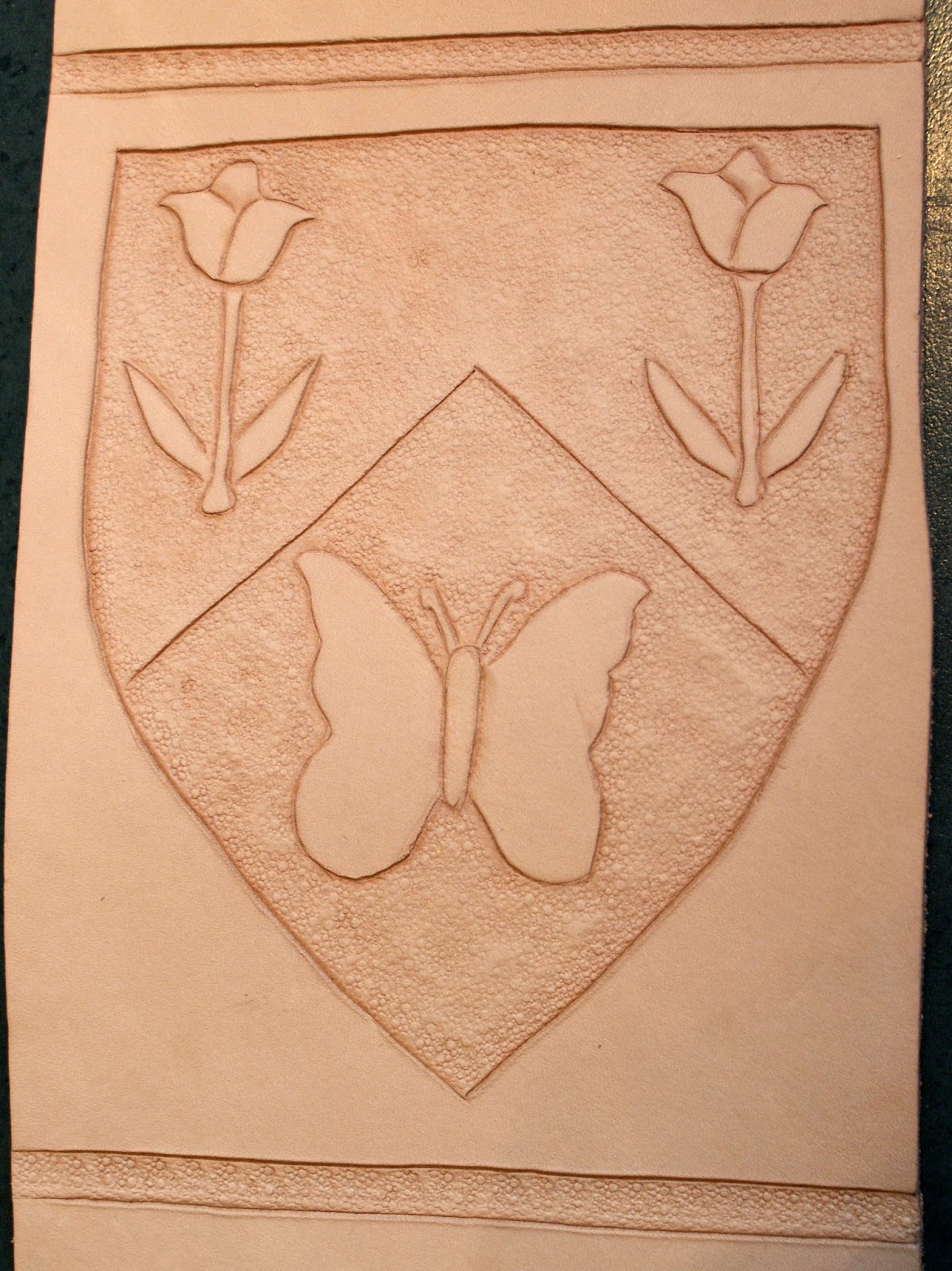 And here are some shots of the main body piece before I started sewing it up: 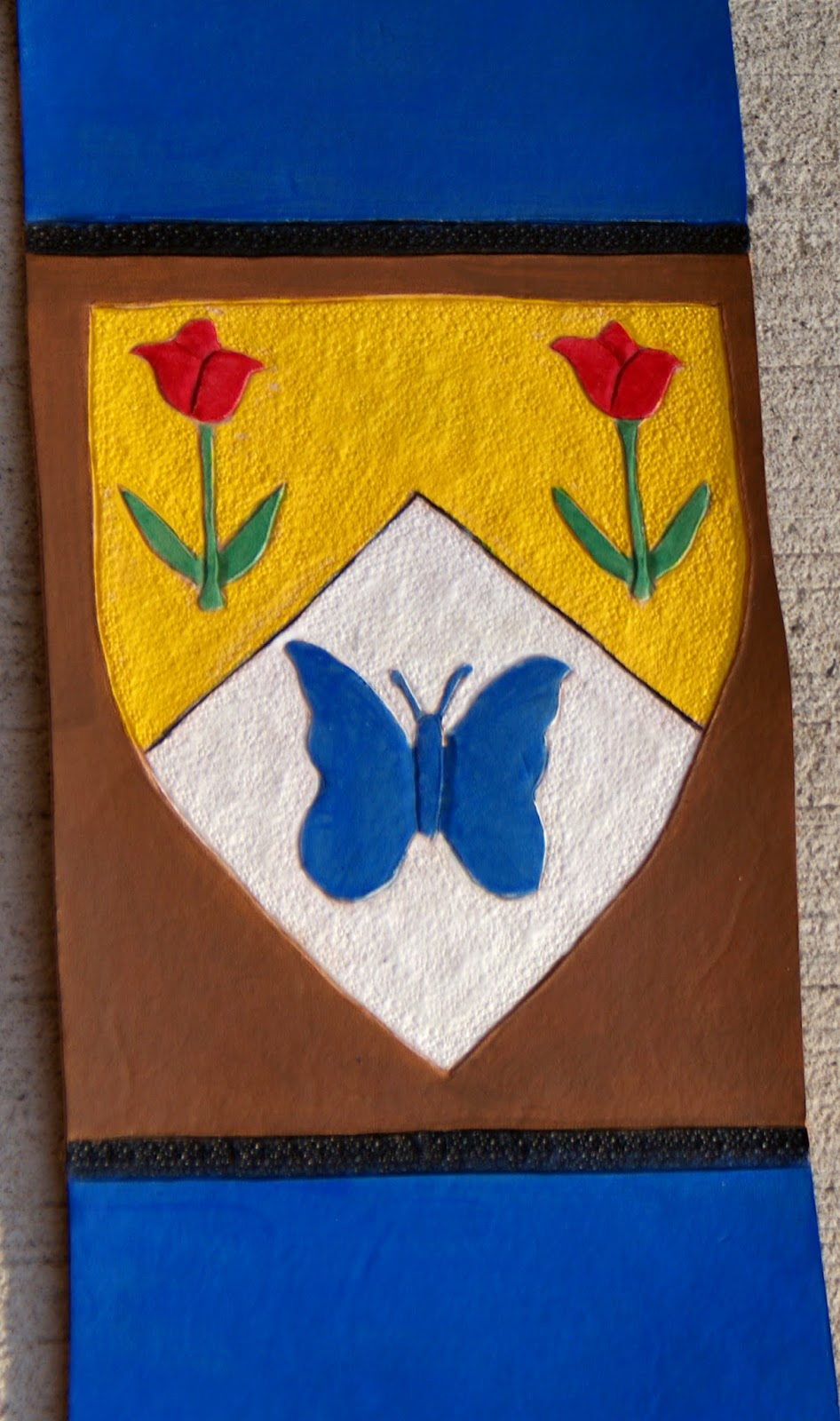 Finally, here are some pictures of the finished piece once I glued and stitched up the join and did all of the touch-ups on the edges and holes. The band at the top is proportionately thicker than I usually do because I was concerned about making the pelican any smaller. But since Kersteken uses a much longer blade than I usually work with (this is designed to fit a 42 inch rapier), it is relatively proportional.

Overall I'm quit happy with how it turned out. There are some things that I would do differently next time, but I'll keep them to myself (although I've talked with Mistress AElfwyn about what I'd change). The most important thing is that Kersteken (I guess that should now be Mistress Kersteken) really, really liked it.

Now back to your regularly scheduled stick-purse updates. :)
Posted by Dafydd at 08:37 No comments: