It's certainly not a fatal kind of fail but it is a setback.

For those that have been following the project, I did a mock-up using my garment weight, chrome tan pigskins as a way to test the pouch design and it seemed to work out just fine. Here's the pic from before, (although you can see the full post with pictures from various angles here). 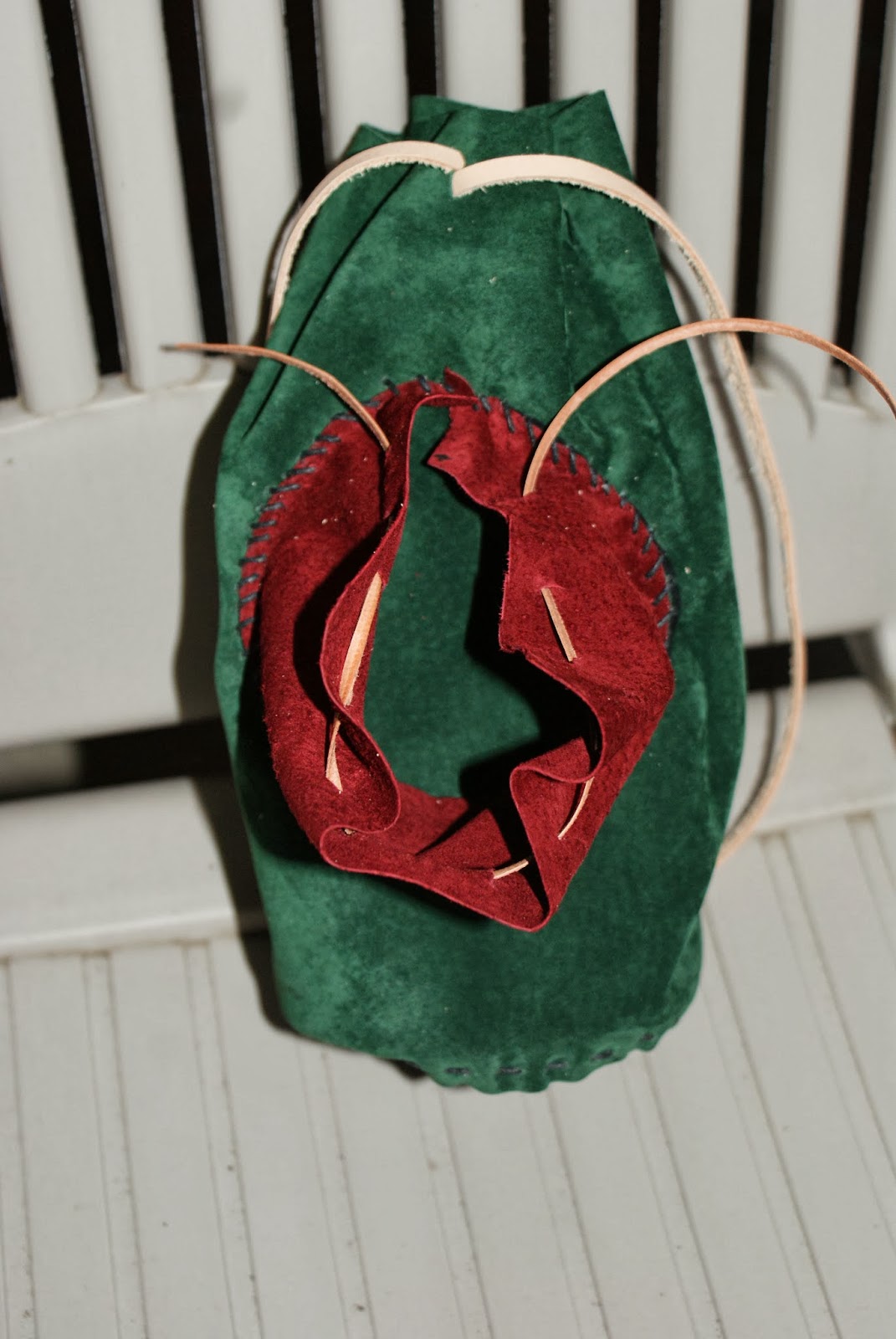 Since all of the mock-ups worked out and my design was set, the past few weeks I've been slowly working on the actual stick-purse. As I mentioned in my previous post, I had a feeling the leather was going to be too heavy so I started out by just doing one of the pouches as a test. That way I wouldn't waste all of my nice veg tan goat by cutting it all until I know it works.

I cut out the main pouch body, the pouchlet and the pouch base from my veg tan (using slightly heavier leather for the base). I used my vinegar black dye to dye the pouchlet piece as I have a theory about the use of colours to distinguish what coins are in which pouch. I then started to sew the parts together using my newly acquired linen thread (I'm using 18/3 thread for the body and 30/3 thread for the attachment of the pouchlet).

Once I started to assemble, I ran into some issues.
Which takes me to the other problem, which is:

Here are pictures of where I got to this week. 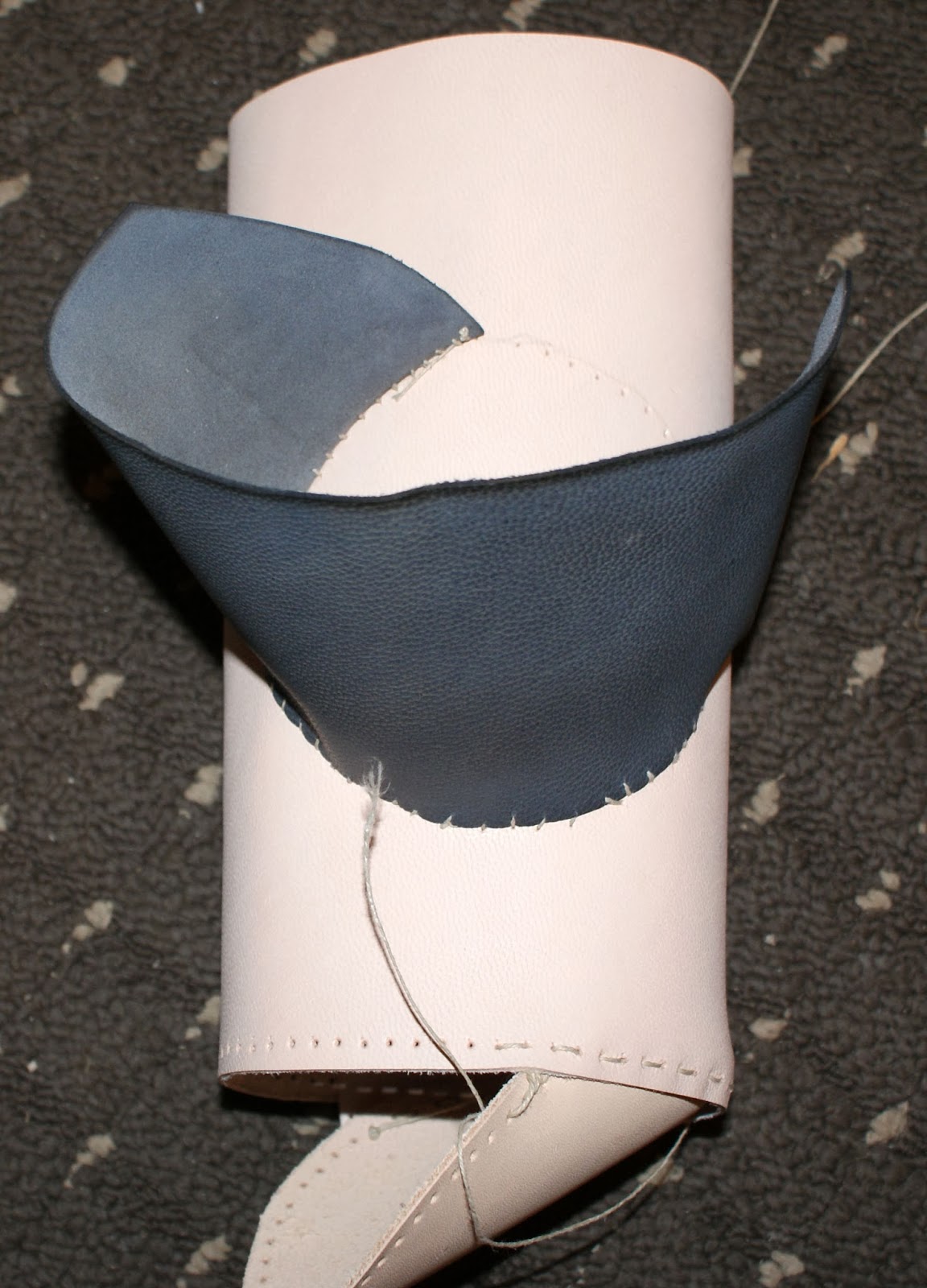 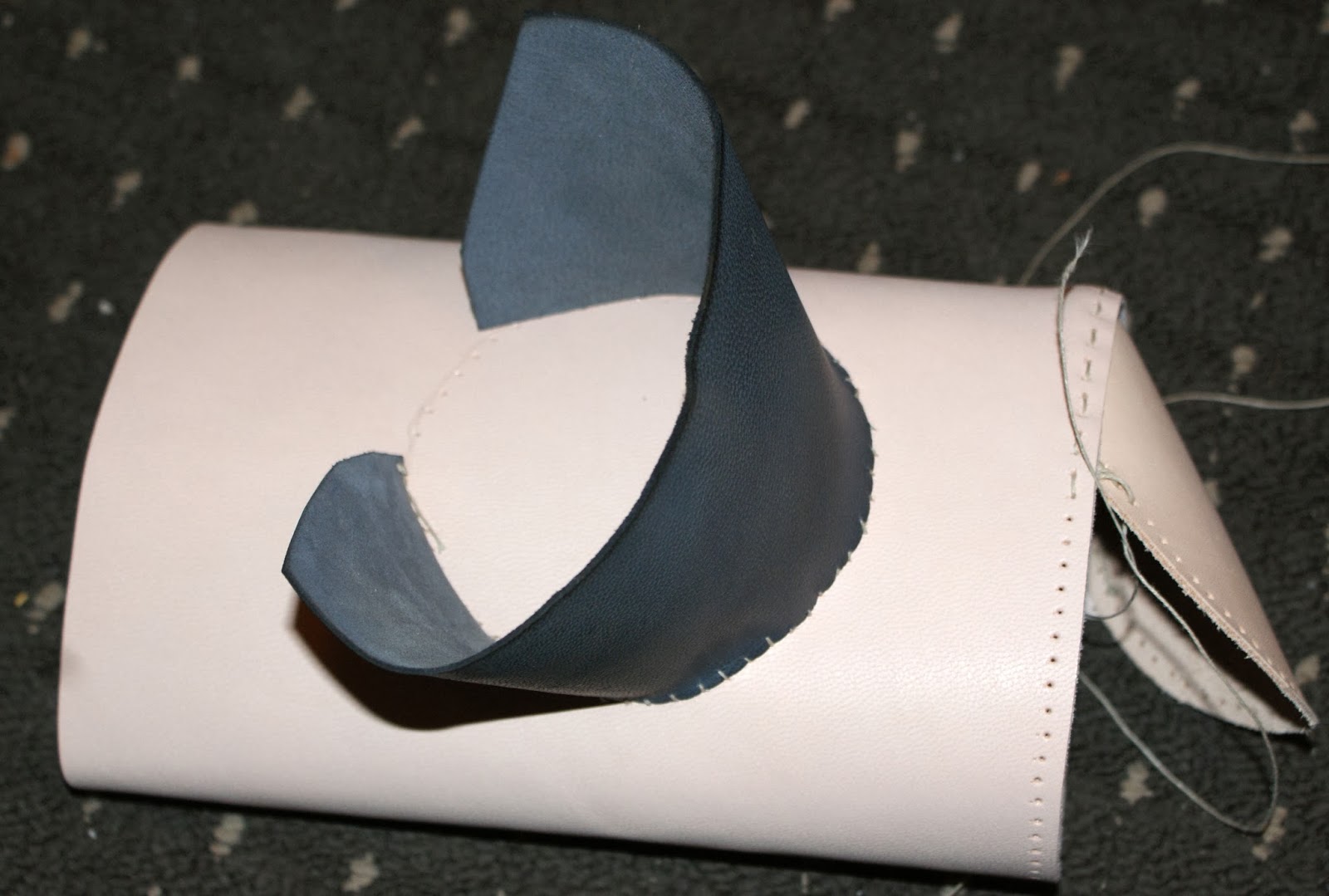 So what's the plan you might ask? Well, fear not as I've already come up with something thanks to a chat I had with Master Dafydd while he was sitting his vigil for his Pelican (of course we talked about leatherworking, what else?) ;)

The original pouch at the Fries Museum is actually made from chamois leather, which is an oil an leather made from sheepskin. Most people would be familiar with this type of leather as it is also used to polish and dry your car. It's super soft and extremely absorbent. You can still find natural oil tanned chamois in various places, although I have no idea if its produced the same way as would have been done in period.

Anyway, in anticipation of my veg tan not working, I had thought to look for some natural chamois. You can get lots of synthetic stuff but the natural oil tan ones are  a bit harder to find. Of course, where would you go to buy stuff like this in Canada but Canadian Tire. :)

So I now have four pieces of chamois leather, about 5 square feet each. That should be enough for what I need. The one thing with this leather is I'm not sure how well it will take dye. I have no doubt it will absorb the liquid but whether it will stay in the chamois as it dries is another question. I did apply some vinegar black to a scrap and it didn't react at all, so there are no natural tannins present. I'll have to try pre-soaking it in gallnut (as per the actual period dye recipe) to see if it will work.

If it doesn't dye properly I'll have to modify my plan. I can skip dying the pouchlets (since the original artifact didn't have them dyed) and just stick with dying the handle leather. I plan to use the veg tan for the handle as the chamois wouldn't braid very well. Since the original artifact does have a dyed handle weave, it would actually be a closer replica of the period item.

I am starting to think that this may not be ready for A&S in March, so I may only have the leather dye project at A&S and then enter this at the next one (or maybe the QPT?).
Posted by Dafydd at 08:32 1 comment:

Last week I did put in an order for my linen thread (for those who wanted to piggy-back, I didn't have enough room on my credit card for anything more once we put together our own order - maybe next time). It should hopefully arrive sometime this week so I can get started on assembly.

This weekend I spent a bit of time down in the basement cutting out some of the pieces for the stick-purse though. I have to say, I'm concerned the leather isn't going to work. I bought the thinnest stuff I could find, 2 oz goat, but handling it as I was cutting it, I have a feeling it will still be too stiff for the pouch body and the pouchlet.

The original purse at the Fries Museum was actually made of chamois leather, which is an oil tanning method different from veg tan. Here's some information on the different tanning methods: http://www.personal.utulsa.edu/~marc-carlson/leather/pl.html

I think I'm going to put a hold on cutting all of the parts out and just cut out one piece of each pouch piece. Once the thread comes in, I'll assemble a single pouch to see how it looks. If it doesn't work I'll need to figure out an alternative.

So what are my alternatives:

The one concern I have is that I don't think my period dyes will work on either of these leathers. It certainly won't work on the chrome tan. In theory though, the leather on the handle would have needed to be a bit stiffer to weave it properly, so I could use my veg tan for that component and dye it as I originally planned.

More to come I'm sure in the next few weeks.
Posted by Dafydd at 07:11 No comments: