So I've started to look at my classes and such for Pennsic this year and as usual there are way more than I'll have time to do. A number of the classes and activities on my list have to do with leatherworking:

On the 25th and 31st, Artisan's Row has leatherworking scheduled for the full day. I've always foudn this interesting but I'm never keen on hauling my stuff to Pennsic and then carrying it around so I can go to this. Last year I walked by but it looked like the kind of thing you would want to have a project to work on, it seems like mostly a sit around and work on your stuff kind of activity.

Also on the 25th, there's a course called "What's in your leather tool box" which could be interesting, plus a class later in the day on making pilgrim's bags.

On the 31st, there's a course on making  a roll-up leather case for "sharp pointy things". I think its mostly a case for sewing stuff but I could probably modify the design for other purposes. Cariadoc is also doing his class on cuirboulli, which I've been trying to get to since my first Pennsic but it always seems to conflict with something.

So it looks like whether I go to the Artisan's Row or not, those two days will be filled with leatherworking (plus some other activities). I also have a bunch of rapier classes I'm looking at taking, plus some cooking and feast planning courses (and this is on top of my rapier battles, thrown weapons and other stuff).

So another restful Pennsic ahead! :)
Posted by Dafydd at 08:28 No comments:

Pre-Pennsic update on various and sundry

With just over a week until the first wave of people leave for the wilds of Pennsic, we've been busy working on all fronts.

Leatherworking class:
For my October leatherworking class for the Canton, I've completely finished my hand out and its ready to be printed. I've also started to cut out the leather for the class, but I have a long way to go. I have the pouch pieces for five pouches cut but still need to do the draw strings and belt flaps. Plus, I'm going to need a lot more than 5 kits.

I did a quick show of hands for who is interested on the Canton e-mail and Facebook page and so far have about 12 people saying they are tentatively interested in taking the class. I'll probably cap the class at 15, just to keep it manageable, and so that people get some one-on-one help if they need it. Right now, I'm thinking I'll probably need to charge a materials fee of a few dollars, just to recoup some of the leather costs, but I'm trying to use scraps and leather I already have on hand (as much as possible) to reduce costs.

I'll probably do 15 kits and if I don't get that many people, I can always use them if I decide to offer the course at Practicum next year.

Stick-Purse project:
Design-wise, I think I'm about done. I may fiddle a little bit with the waxed linen to see if I can get some thinner threads pulled out (so that I can in-turn use a smaller needle and get the stitches tighter), but otherwise I think its good to go.

This week I started working on my documentation and I'm now about 80 per cent done. Really, the only information I need to add in is stuff from Purses in Pieces that I need to pull out. The content is about six pages, with another 4-ish pages of annexes with pictures of artwork and extant examples, links and bibliography.

Once we're past Pennsic, I'll need to spend a bit of time going back to my period leather dye project so I can figure out at least a few more colours. I've got the yellow for sure. I'd like to try to get a red since I have the brazilwood. Black or dark brown would also work if I can't get the blue or green recipes to work.

Once that's done, I'll actually be ready to work on the final project, which means there's a small chance I'll have it ready for this year's Kingdom A&S.

I did a full inspection of Avelyn's body armour pre-Pennsic and did some minor repairs (some of the stitching had blown). Also did some work on her leg armour to hopefully make it less of a pain to wear.

Added straps to her demi's she bought at Pennsic last year although there's some question if they are usable (may be too short, leaving her wrist not adequately protected).

We went to the Canton A&S and armouring day this past Monday. I was there for a meeting and Avelyn going to get some help with the gauntlets. Unfortunately she had a bit of an incident and discovered how sharp my leather scissors are, and didn't get much done the rest of the night.

Morag was able to help with some structural ideas and did help her cut out the leather pieces, so I may see how far I can get with assembling it all. We can always go to A&S this coming Monday to get help with the riveting. This may end up having to wait until after Pennsic though since we're running out of time to get projects finished and get everything packed.

Another stick-purse mock-up (with pictures)

Today I did a run to Zeli's to pick up some waxed linen thread, some glover's needles and other miscelaneous equipment so I could do my next version of the stick-purse.

Improvements I wanted to make this time were a more accurate pattern for the pouchlet, plus trying the linen thread that I'll be using for the final pouch so that I can figure out any of the particularities of the material.

As a reminder, here is the stick-purse from the Fries Museum that I am trying to reproduce.

And here are pictures of today's mock-up. I don't think I can get much closer as far as the actual pattern goes. It's pretty bang on. 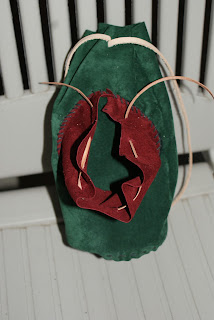 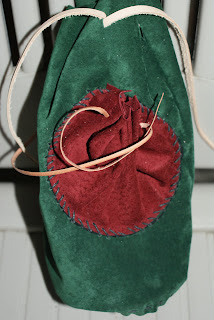 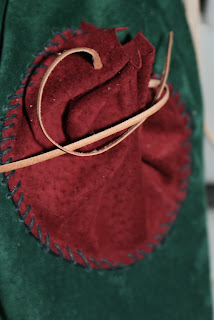 Today I learned a new skill (with pictures)

As part of my stick-purse project I learned a new skill today.

The stick purse has a leather braided handle over top of a wooden core. Since I've made some good progress on the pouch design itself, I thought I should start working on the handle. On my birthday I had bought a leather braiding book from Zeli's so I bought some one-inch wide dowels and started playing with it.

I have two types of dowel, oak and poplar. I'd like to use the oak but I'll have to see what works best since I'll need to be able to nail the pouches to the handle without splitting it (yes, the extant example at the Fries actually had the pouches nailed to the wooden handle).

As a start I made what the book calls a slit leather handle covering of one thong. Basically you wrap the handle with a single piece of lether that has slits cut into it. You then weave a single strip of leather over and under the slits until you have covered the handle.

I picked this handle design because the extant examples and the artwork normally show that the handle is covered by a chequed pattern of leather. This is the simplest type of pattern I found in the book that produces that look to the woven leather.

I cut the handle cover piece last night, with 1/2 inch wide strips cut into it. I then dyed it a dark brown and then glued it to the handle. After leaving it to dry all day, I wove the tan strip of leather (also 1/2 inch wide) through the slits in the handle.

I think it looks pretty darn good for a first try. Second picture is with the mock-up of the pouch so you can get an idea of what it will look like. 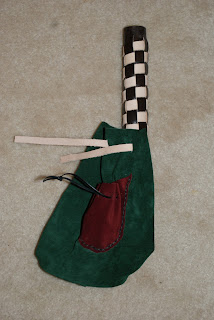 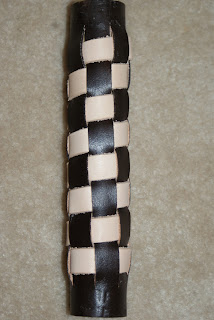 Over the long weekend Avelyn and I made progress on a bunch of long-standing projects to help get ready for Pennsic. This is just a quick post to track some of the work we did on the weekend for future A&S reports:

Re-rim the shield once new tubing has been acquired and heraldry has been glued on
Adjust Avelyn's armour belt and legs
Add straps to Avelyn's full gauntlets
Add trigger loop to Avelyn's sword
Posted by Dafydd at 13:29 No comments:


It's the Canada Day long weekend here. Usually we spend this weekend at Trillium War but due to some unforseen circumstances we ended up not going this year. Instead, we stayed home for a stay-cation and I was able to do some leatherworking.

I took my previous design that I'd developed based on the Fries museum purse and took it the next step, adding the pouchlet and draw strings.

As a starting point I used the pouchlet pattern that Mistress Elizabeth provided in her hand out from the Pennsic course she taught last year. The shape doesn't exactly match the picture from the Fries (I think it's more like the other example in Purses in Pieces), but it gave me a good idea of what's involved, since I've never tried doing a pouchlet before.

Here are the pictures: 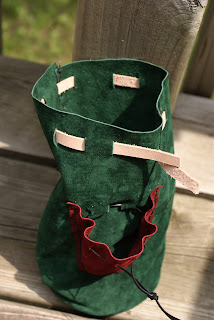 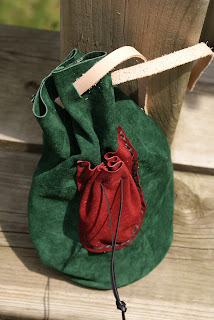 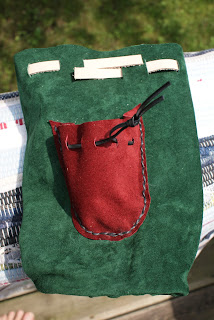 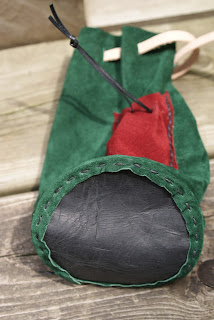