Black is the new....black - Leather dye update (with picture)

Over the weekend I did an experiment with the vinegar black leather dye recipe.

My previous attempts at the vinegar black didn't really follow a recipe, I just let some nails sit in vinegar for a few weeks and then painted it on the leather. It worked, but I wanted to compare how it would work with an actual period recipe.

The concept and overall function was the same - the iron in the vinegar solution reacts with tannins and turns the leather black - but the period recipe calls for pre-treating the leather with gallnut solution to introduce the tannins. This is largely unnecessary with modern leather because it already contains tannins from the vegetable tanning process. But if, as is suggested in the Plictho, most of the recipes were intended for use with alum tawed leather, perhaps the tannins needed to be added in period?

In any case, I wanted to see if the introduction of additional tannins would affect the colour, even for veg tan leather. The theory being that more tannins might make a darker black.

I had previously made a new batch of the vinegar solution by letting some rusting nails sit in a jar of vinegar for about three weeks. The recipe called for boiling the nails in vinegar for four hours, but I figured letting it sit for that long would have the same general effect without stinking up the house. Call it a modern adjustment. :)

The next step was to make a solution using the gallnuts to extract the tannins into the liquid, so that I could apply it to the leather. I had gotten some gallnut extract from a dying supply store when I did my last order. This is the pure extract rather than the actual galls, so I modified the recipe a bit here too. The original recipe called for grinding up the gallnuts and then boiling it in water for an hour. Since I have the extract already processed, I simply added it to the boiling water (as much as I could dissolve into it) and boiled it for about 15 minutes. I figured I didn't need longer since I wasn't trying to extract the tannins but just to dissolve the powder into the liquid.

I let it cool a bit and then painted it on the leather as per the recipe instructions. Once it dried, I applied the vinegar black to both the gallnut-treated leather and an untreated piece as a control. I did only one coating, since I wanted to have a good comparison of the darkness of the colour. Once it dried I then applied a coat of olive oil.

As you can see by the picture below, there's very little difference in colour between the two pieces. The gallnut-treated leather is a bit darker but that could be fixed by applying extra coats of the vinegar I suspect. It also has a bit more of a shiny finish for some reason. 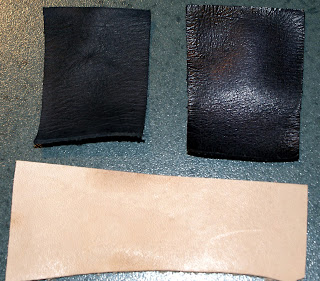 The one big difference I found is that the gallnut-treated version made a mess when I was doing it. Basically the vinegar was reacting to the liquid I had already applied to the leather, which meant it turned black as I was applying it on the surface, rather than reacting to the leather itself. As a result, my hands were coated in black that didn't wash off.

I also noticed that it left a black residue on the surface of the leather, which would need to be polished and rubbed off. I think most of it came off when I was applying the oil finish, but I'd still be concerned about it rubbing off on someone wearing a leather item. The non gallnut-treated leather was very well fixed and the black was not rubbing off the leather at all.

It could be that I didn't let the leather dry long enough between the application of the gallnut solution and the vinegar. But, given that both methods seem to produce an equivalent quality of black, I think I'm more likely to use the non-gallnut version for day-to-day use since I have more confidence in it not rubbing off on people's clothes.

Thanks to the input of my judges at the Queen's Prize Tourney (Master Dafydd, THL Lassarfhina, and Mistress Gaerwen) I've been able to tweek my process for my red dye and get something that I would be really happy to use on a project. It's a nice rich red, and a big improvement on the brick/brownish-red colour I was able to get prior to the QPT. 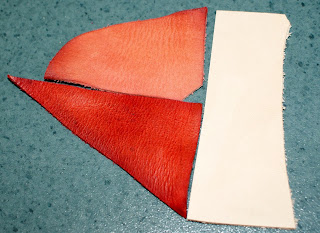 For those who didn't see my last post, here are the things I did differently with this batch from the previous.

So that leaves me with four working dyes that are ready for use on select projects (I still need to be careful what I use them on since I'm not entirely sure they won't rub off over time or if they get really wet). I still need to do some more experiments with the black, but otherwise the only thing left is the bane of my existence and the one colour I haven't been able to get to work at all, the blue dye.
Posted by Dafydd at 11:03 3 comments:

I've been puttering away on my various projects since I finished the herald's binder. I'm still way behind but stuff is getting done.

Leather Dyes
1) I made a new batch of the vinegar black, using rusted metal this time. Instead of boiling it foe 4+hours in vinegar I just let the nails sit in the vinegar for a few weeks. Figured it would have the same effect without stinking up my house as badly.

Next step is to prep a piece of leather with the gall nut extract to see if the resulting black is better than using just plain veg tan.

2) The other night I started a redo on my red leather dye to see if I could get it to work better, based on the discussions we had at the QPT in the fall. We'll see how well it works, the second coat is still drying. Here's what I did differently from my last attempt:

3) I also started thinking about how I'm going to update my documentation. I need to add any new research or colours (for example, I found a fourth source of period recipes), but that's fairly easy. I also plan to include an annex where I'll detail what I changed since the QPT to show that I'm not just resubmitting the same exact project, but that I've progressed and continued my research and experiments based on the input I received.

I did another test run on the handle braiding, this time using thinner strips both vertically and horizontally. I've decided to go with the original wider pattern. I like the look better, but also the thinner strips cause the pattern to raise more, making the leather shift on the handle. From a practical perspective, I also need a significantly longer strip of leather to do the thinner pattern and I don't actually have a skin long enough to produce something that long.

I also tested the colour and I think I like it better with the dark colour as the base (vertical strips) and the light colour being woven in, so that's how I'll do the handle for the purse.

I tried again but still haven't been able to figure out the leather braided knot for the end of the handle. Given how much work I have left to do for Spring A&S, this element may get scrapped.
Posted by Dafydd at 08:04 No comments:

Months ago, Nathaniel talked to me about possibly doing some sort of leather herald's binder cover. It's been on my to-do list for a while, but I've been busy working on my QPT project so it kind-of got shelved for a while. I had worked out the carving pattern for the tower at Baron's Howe, but I hadn't really done anything else.

This weekend, while Avelyn was raiding the Black Friday hoards, I was going to do some more work on my leather dyes but decided I should try to get this done instead.

I presented it to the Canton at our meeting/Canton Christmas party on Sunday as a Christmas gift. Yay!

Here's what I did:

First, I had to carve the tower applique piece. I worked on that over the course of the past week and got it ready to go for the weekend. For the dyes, I used a brighter yellow (rather than the mustard yellow I used before), and mixed my own shade of blue to brighten it up a bit since the stuff out of the bottle was so dark. I was pretty happy with the results. 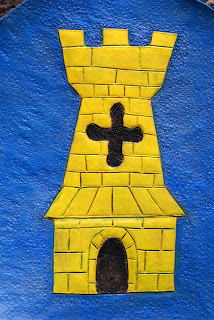 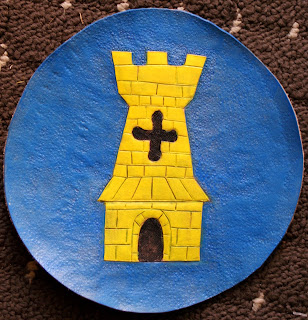 Next, I had to get the binder piece done. I decided to use my period dye for this part, so used what was left of my vinegar black. It's such a big piece of leather I had to use every drop I had, and it still wasn't quite as dark as I would like, but it's still pretty good.

So on Saturday, it was a matter of assembling the pieces. I stitched the tower applique on, then used my rubber cement to stick the big leather piece onto the binder. I had originally planned to roll all of the edges over but that didn't work so I just stitched across the top and bottom to fix the piece onto the binder. I trimmed the edges a bit, and voila - she's done. 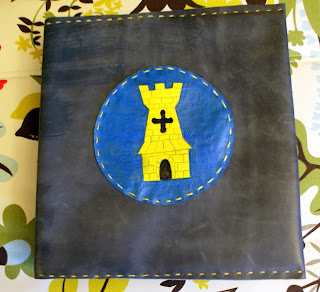